To keep up with the timing of my goal to post about women artists represented on Public Art Walk Boston, I’ll focus on the known facts about Creature Pond now. Maybe I’ll have more to offer in a future post.

George Thorndike Angell (June 5, 1823 – March 16, 1909) was an American lawyer, philanthropist, and advocate for the humane treatment of animals. 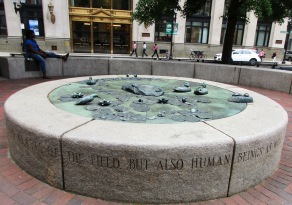 In 1868 he founded and became president of the Massachusetts Society for the Prevention of Cruelty to Animals,

“OUR HUMANE SOCIETIES ARE NOW SEWING THE SEED OF A HARVEST WHICH WILL ONE OF THESE DAYS PROTECT NOT ONLY THE BIRDS OF THE AIR AND BEASTS OF THE FIELD BUT ALSO HUMAN BEINGS AS WELL.”  George T. Angell (text engraved around the base)

“Nine artists* contributed to this whimsical sculpture, which was added to Post Office Square in 1982, during a period of extensive renovations to the site. The bronze pond is home to a variety of bronze wildlife, including ducks, frogs, and dragonflies.” (quote from description of Creature Pond on Public Art Walk listing) 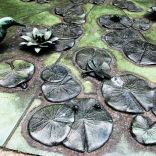 bronze creatures and plants in pond shape on granite base

“This celebration of nature complements the location well, since a nearby fountain is dedicated to the memory of George Thorndike Angell, founder of the Massachusetts Society for the Prevention of Cruelty to Animals.” (quote from description of Creature Pond on Public Art Walk listing) 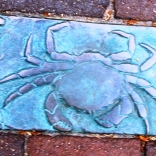 I haven’t yet tracked down any documents about the planning, coordination, and communication among the nine artists, though I’m hopeful. Meanwhile, here are some words and links about the two women artists, both dynamic forces in the collaborative spirit of significant public art projects.

Sydney Roberts Rockefeller: When she lived in the Boston area in the 1970’s and 1980’s, Sydney Roberts Rockefeller originated and coordinated many public art projects in Boston. Currently, she lives and works in Maine.“Roberts Rockefeller’s resume of community work is long, ranging from working for more affordable housing options on the island as board of directors vice president of the Island Housing Trust to contributing to nonprofits including Maine Hospice Council, Maine Seacoast Mission, and Schoodic Institute at Acadia National Park.”(quote from article in Lincoln County News Oct. 2014)

Clara Wainwright was a key founder of the New Year’s Eve First Night in Boston (1976) that proved an inspiring model for similar celebrations in numerous cities worldwide. She has initiated and sustained an amazing range of community arts celebrations, some with her husband William Wainwright (1924—2012). For decades her creative quilts have enlivened many public spaces, and she has guided numerous community quilting projects as well.

“Wainwright has a magic about her, an innate ability to bring together people that have vastly different backgrounds and experiences, people who might not otherwise meet. She equips them with the tools they need to get started and then sits back to watch an invisible thread bind everyone together. With a head full of ideas and a heart full of openness, Wainwright continues to play a pivotal role in shaping the Boston we know and love today.” (A Quiet Kind of Act, article for art21 magazine by Elizabeth Devlin | May 29, 2014)

Quilting To Mend The Wounds Of The Marathon Bombing by Greg Cook for the Artery July 6, 2013

A Rockefeller, Name Synonymous With Wealth, a Player in Maine, article for the Lincoln County News 2014