I had wavered about including Denise Kupferschmidt on my list of women artists represented on Public Art Walk Boston after I read that “a group of assistants executed this piece, guided by precise written instructions and diagrams from LeWitt.” Yet I came to understand that each artist in the group that carried out a wall drawing could contribute uniquely within LeWitt’s guidelines. More important, as I began to learn about Denise Kupferschmidt’s art, I truly wanted to share what she has shown! For context, here is a bit about LeWitt:

“LeWitt’s art is not about the singular hand of the artist; it is the ideas behind each work that surpass the work itself…. Though modest—most exist as simple instructions on a sheet of paper—the drawings can be made again and again and again, anywhere in the world, without the artist needing to be involved in their production.” ( quote from Wikipedia summary about Sol LeWitt’s art)

Emphasizing geometry and repetitive patterns in his work, Sol LeWitt brought recognition to the Conceptual Art movement in the 1960s.

Over the following years his art became both increasingly complex and increasingly playful, and around 1980 he began to incorporate bright colors in his wall drawings.

As is typical of LeWitt’s work, a group of assistants executed this piece, guided by precise written instructions and diagrams from LeWitt, who wrote that the artist’s idea “becomes a machine that makes the art.”

Although conceptual artists generally deemphasize the appearance of a work of art, instead highlighting the ideas that determine its form,

LeWitt’s wall drawings are both conceptually driven and visually appealing, even decorative.

[captions of these photos quote text from Public Art Boston]

Denise Kupferschmidt is the only woman listed on the artist team for this wall drawing. Though she has not listed Wall Drawing #1128 among her collaborative projects on her CV, she has listed an earlier LeWitt drawing (from 1971) as a source for her art in a 2005 exhibit (“Knock-offs”). Based on her CV, her work as an artist began towards the end of LeWitt’s life.  I would be eager to know her thoughts about the experience of carrying out LeWitt’s instructions for Wall Drawing #1128 and her perspective on the influence of his work.

“Many of the works from this time are seen as explorations of the optical effects of color and pattern. The form and appearance of the work are dictated by certain guidelines which are determined by the artist; no colored band, for example, may touch another band of the same color.” (quote from the description of Wall Drawing #1112 on Mass MoCA site) 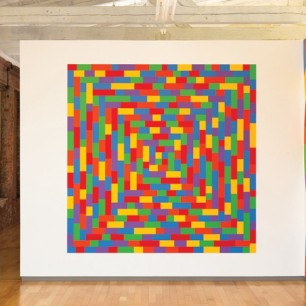 These two wall drawings from the current long-term exhibit at MASS MoCA share qualities with Wall Drawing #1128 and others created during the same period. The full sequence of the retrospective exhibit reveals how LeWitt first focused on black line compositions but then introduced color and other elements over time.