Art Above Us: Cambridge Murals by David Fichter and Be Sargent

Almost caught up with some recent temporary art, I’ll share a few views of three murals in my home city, Cambridge. Two, by Be Sargent, have been here for nearly twenty years. One, by David Fichter, has been for fourteen. All three begin above eye-level, so I had seldom made eye contact with the animals or people depicted. That may be why I hardly stopped to look up and take them in, till now. Below are photos with notes and quotes about what I began to notice when gazing up.

Wall of Respect for Animals, completed 1999, Be Sargent

Be Sargent’s website page for this mural presents close views of individual images as well as photos of Sargent and other artists painting from scaffolds suspended along the brick wall.

“An eighty-foot Environmental Mural for the Alewife MBTA Station Depicts Mystic River watershed flora and fauna of Alewife Reservation and public outdoor enjoyment. Made by students and artist with business and community support” quote from the invitation to dedication of the mural, Oct 2004

“Twelve students worked on the project. Some of them actually photographed, illustrated and painted the species of insect, flower, tree, mammal or bird that they observed on the Alewife Reservation. FAR developed a full program with naturalists and recreation on site for the youth in conjunction with the Mayor’s Summer Youth Program which supported the students with stipends. …..The high school youth, mostly from Rindge and Latin High School, gained the ability to dramatize nature by understanding its workings. Renowned educator-artist and mural painter, David Fichter, directed the Project.” quote from Environmental Arts Mural to go on Alewife T stopFriday, October 22, 2004 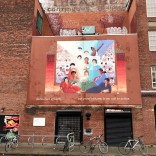 “Sargent said she decided to approach the Women’s Community Cancer Project (WCCP) with the idea of painting a mural for the project, when one more friend of hers was diagnosed with cancer. She wanted to create a work of art that would draw attention to cancer’s murderous toll on women-not as a picture of doom and gloom, but as a celebration of movers and shakers for political and social justice, both those living and those killed by cancer.” quote from States of Feminism by Brooke Ackerly, Vanderbilt University

Look up more about the art on these websites

A Wall of Respect for Animals

States of Feminism by Brooke Ackerly

Wish 1: I and others will notice and consider high-up murals such as these three.

Wish 2: The originally informative signs below the murals on Church Street and Alewife T will be restored to more readable form.

Wish 3: People will explore the visually rich websites of Be Sargent and David Fichter for broader perspectives of this post. 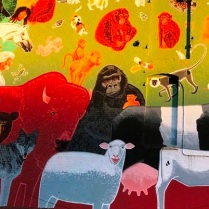 Wall of Respect for Animals