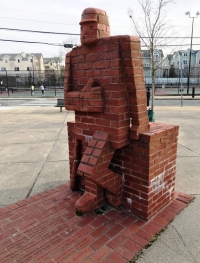 By a ballfield in North Cambridge ( Rindge Field), since 1983 two brick beings by David Judelson have faced each other supported by pertinent names, equipment, and stories. In recent years I had visited them with vague plans to post about them, though waiting for a way to focus. Then this spring when walks with face coverings became one of the few recreational options, I discovered that Brickworker and Ballplayer had been outfitted in response to the pandemic.

Brickworker and Ballplayer with visitors April 2020

Their April addition of facemasks was the needed impetus for me to put together what I’ve learned about them so far, mostly from the Cambridge Arts Council website:

“Two monumental figures face off behind homeplate at Rindge Field. Together, they embody North Cambridge’s past and present. The ballplayer represents the site’s modern-day use as a recreation area. The worker and bricks used to make the piece (fired by Judelson himself) reflect Rindge Field’s previous incarnation as one of the many North Cambridge brickyards that were in active production from 1844 -1952.” (quote from Fact Sheet 06 on Cambridge Public Art listings) 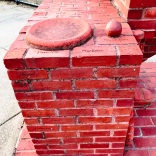 “Names of brick companies and the families of Italian, Irish, and Canadian immigrants who worked in the ‘yards are inscribed in the bricks, along with an overview that celebrates the transformation of North Cambridge “from swampy marshland into vibrant neighborhood.””(quote from Fact Sheet 06 on Cambridge Public Art listings) 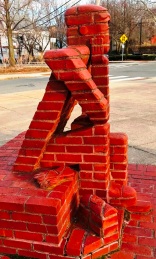 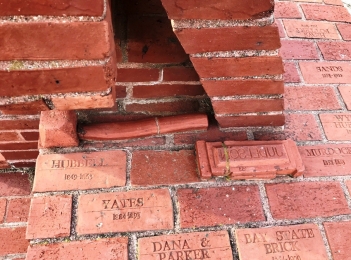 “The materials an artist chooses play a significant role in our understanding and experience of a particular work. David Judelson’s use of brick explicitly connects this sculpture to the history of its location. He actually made his own clay bricks using wooden molds. While the bricks were still wet, he shaped the faces, hands and feet of the two figures. After the bricks were fired, he worked with a team of brick masons to assemble the final piece.” (quote from Activity Guide 06 on Cambridge Public Art listings) 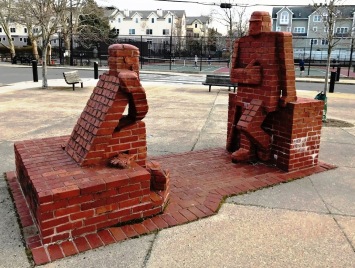 “David Judelson originally pursued architecture as an undergraduate and graduate student at M.I.T., but became increasingly interested in ceramics. He studied at the Haystack Mountain School of Crafts in the 1970s, and has pursued art ever since. His many large-scale public commissions include a sculptural rooftop terrace for Scholastic, Inc., in New York. He also has exhibited his work in numerous group and solo exhibitions. He spent many years living in the Boston area before moving to New York City.”(quote from Fact Sheet 06 on Cambridge Public Art listings) 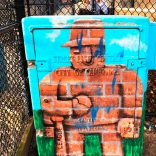 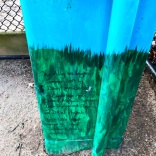 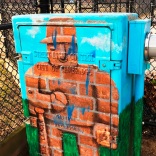 Yet again I am grateful for Cambridge Arts Council for bringing so much public art into being. Especially while most arts and educational resources are restricted by health and safety priorities, I enthusiastically appreciate the enriching resources on the Cambridge Public Arts Explorations site.